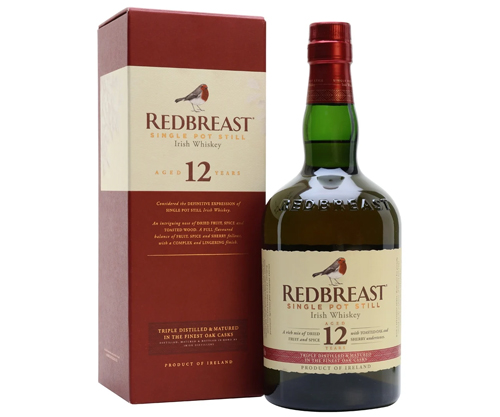 Redbreast is a 12-year-old, single aged pure pot-stilled whiskey that’s been triple distilled in traditional copper pot stills from malted and unmalted barley mashes. Matured in a combination of Bourbon seasoned American Oak barrels and Oloroso Sherry seasoned Spanish oak butts, it might be the finest Irish whiskey available. Picked up the top prize in its category at the World Whisky Awards 2010, and was named as Irish Whiskey of the year by Jim Murray in the Whisky Bible 2010, with a score of 96 points.

Full of aroma and flavour, Redbreast 12-Year-Old benefits from a strong contribution from distillates which have matured in Oloroso sherry casks, giving it its trademark Christmas cake character.