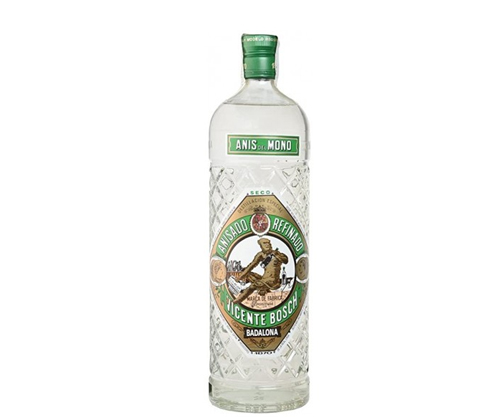 This famous Spanish brand of anise, often considered along with several French anisettes to be the finest of its type, was founded by Vicente Bosch at the end of the last century. There is more than one colourful anecdote behind the inspiration for the brand. One reports that Bosch, while out on business, received a little monkey as a gift which he then selected as the trademark for the brand. Commenators have noted that the monkey’s face appears to be based on Charles Darwin himself – a nod to the debate at that time about the theory of evolution. The diamond pattern on the bottle, often copied by other brands, was inspired by a perfume bottle Bosch bought in Paris as a present for his wife.

Today, Anis del Mono is available in both ‘Dulce’ (sweet) red label and ‘Secco’ (dry) green label versions. Its creation employs natural anise and other aromatic plants, distilled in copper stills to obtain essential oils which along with sugar cane, demineralized water and neutral alcohol make the final mixture before being gently stirred, filtered and bottled.