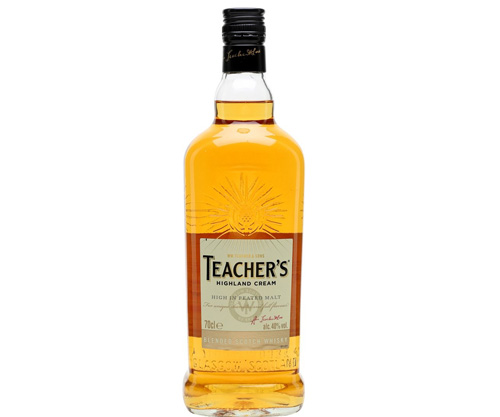 William Teacher started work in a cotton mill aged seven; in 1830 he was employed by a small grocer in Glasgow. After marrying the owner’s daughter, he managed to arrange a liquor licence and opened his first ‘dram shop’. These were well maintained public houses selling reasonable spirits. Twenty years later, Teacher was officially recognised as the largest licence holder in Glasgow. The Scotch Whisky bearing his name remains today blended & bottled in Scotland. While all blended Scotch Whiskies are made from either malt and/or grain spirit, Teacher’s Highland Cream has an exceptionally high malt content – at least 45%. This is a feature which contributes to its unique character and flavour. The two core components are Glendronach and Ardmore. Glendronach is an exceptional sherry cask Speyside malt, produced in one of Scotland’s oldest working distilleries. The heart of Teacher’s ‘rugged’ flavour comes from Ardmore.

Teacher’s was one of the first and believed to be one of the best blended Scotch whiskies. In order to achieve ‘perfection’, William Teacher used a high proportion of expensive single malts. This blend became Teacher’s Highland Cream and to this day, still contains the same high proportion of malt whisky. A malty and creamy whisky, rounded, smooth on the palate with an oaky and smoky finish.