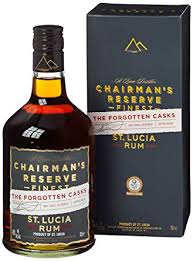 On May 2nd 2007 St. Lucia Distillers was struck by a major fire which destroyed the administration and blending facility. Mercifully most of the distillery was spared but suffered great problems with storage space for the casks. In the melee that followed cellar master, Mr. Cyril Mangal, was forced to find space for ageing casks in the most unusual places. Having done so the cellar team had a memory lapse and forgot the casks that had been laid down for the Chairman’s Reserve. These casks were discovered recently and upon tasting were found to contain a wonderfully complex rum which was decided to offer as a limited release.