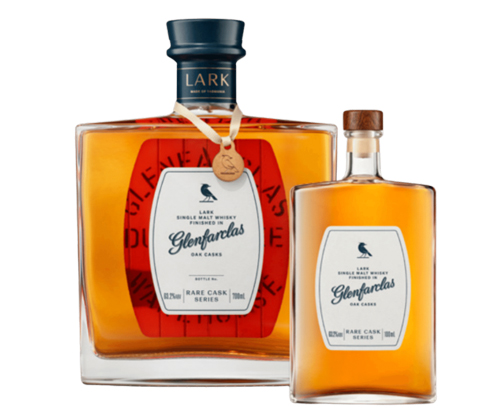 It was over a dram of Glenfarclas 15, many years ago, that Bill and Lyn Lark remarked that if they were ever to make a single malt, they would hope to have it resemble what they were enjoying at that moment. Rather fortuitously, and only a short time before the opening of their now legendary distillery, Bill received a phone call from Scotland. It was John Grant from Glenfarclas. The two talked whisky for many hours, and a lifelong friendship was formed. One that would transcend oceans, decades and establish an unbreakable bond between the Glenfarclas and The House of LARK names. A long, luscious single malt matured in traditional port casks, with a touch of sherry and bourbon. Finished in Glenfarclas casks from the Scottish Highlands.

The Rare Cask Series is a celebration of Tasmanian whisky both rich in character and heavy with history. It’s an endless pursuit of the abandoned exceptional — combing countries for casks both rare and remarkable. It’s an exploration of evolution — of new life blossoming within the old, in extraordinary, unmatchable ways. A pursuit for the extraordinary realised through unearthing some of the world’s most rare and storied casks. The resulting expressions are unique single malt celebrations of character, culture and the particular casks in which they are finished.

The Rare Cask Series Glenfarclas release is our single malt finished in casks that once held Glenfarclas 15 Year Old Single Malt Scotch Whisky. Your 700mL bottle is accompanied by a copper medallion meticulously handcrafted from a decommissioned LARK copper pot still, and a complimentary 100mL bottle enabling the collector to enjoy and savour now.