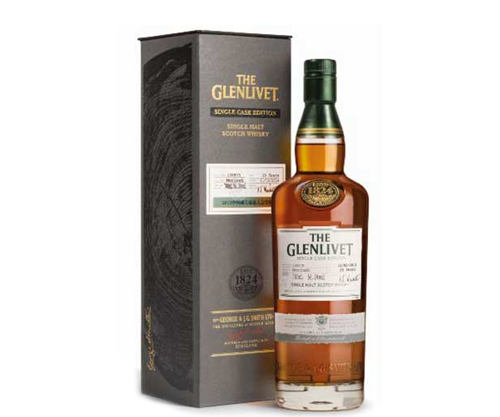 The Glenlivet Single Cask Series is a premium whisky in which each bottle comes from an individual aged oak barrel, instead of being created by blending together the contents of various barrels. The whisky from each barrel is bottled separately, with each bottle bearing the barrel number and the bottling date. The individual barrel contributes unique characteristics to the finished whisky and is individually selected, so each release is excitingly different.
This Glenlivet Single Cask, 15 year old, ‘Morinsh’ was bottled on 11/02/2014, at a cask strength of 56.3% abv. Non chill filtered, Cask #130975.

In 1594, deep in the Highlands of Scotland near Morinsh, the Battle of Glenlivet took place. A fearless and dramatic clash between forces led by the 7th Earl of Argyll on one side and the 1st Marquess of Huntly on the other. The Marquess of Huntly’s men, though smaller in number, defeated those of the Earl of Argyll. This bottling was named in honour of this great battle.

Finish: Long and smooth, slightly dry and spicy at the finish.