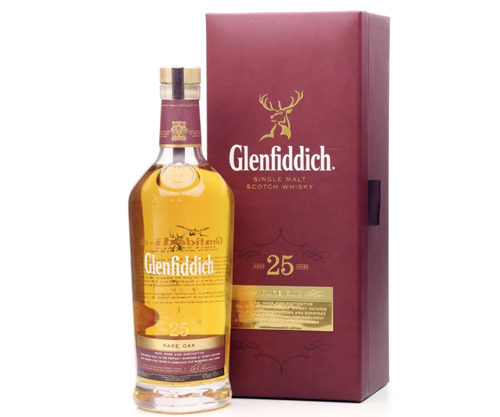 Launched in 2014, this new extra aged Glenfiddich was matured in European sherry butts and American bourbon barrels. Two and a half decades has made an impact – wood from the large Spanish sherry butts has gradually given the whisky deeper, richer fruit flavours while the smaller American oak barrels have rapidly infused the whisky with soft vanilla and hints of spice.

It was finally married together in small batches and bottled at 43% Alc./Vol.Brian Kinsman, Glenfiddich Malt Master comments: “Casked 25 years ago, this is an exceptional aged whisky of rare character and complexity. True to the traditional Glenfiddich style, the signature fruity flavours have developed intensely over 25 years. A distinct sweetness from the American bourbon barrels also shines through, resulting in a unique flavour, to be savoured and enjoyed by the single malt enthusiast.”