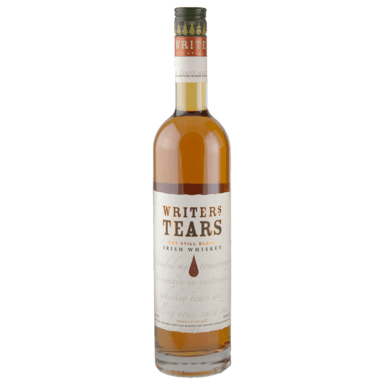 Writers Tears Pot Still Irish Whiskey delivers a wonderful combination of soft bourbon notes with an undercurrent of light malt with crisp, mouth watering bursts of honey and spice. This is a throwback to the last century in Ireland where spiced Pure Pot Still Whiskey was married with floral single malt.

Writers Tears is a vatting of Pure Pot Still and Single Malt (proportions are a closely guarded secret). It’s the creation of Writers Tears proprietor, Bernard Walsh, who enjoys privileged access to the warehouses of certain Irish distillers from where he selects the casks for his own labels. Some years ago he came up with this entirely ‘new’ type of whiskey: a blend of malt and pure pot still (PPS) whiskeys (all other Irish blends contain some proportion of Coffey still grain whiskey). The Pure Pot Still is a style that was once known as the “Champagne of Irish Whiskey” and was traditionally a favourite of Irish writers suffering from writer’s block. Rather poetically, they drank so much of it, some were reputed to have cried tears of whiskey when inspiration finally hit. Although the Pure Pot Still style was once widespread in Ireland, a number of historical factors including the The Irish War of Independence, the Irish Civil War, and prohibition in the United States led to a drastic reduction in the number of Irish distilleries. With this reduction in Irish whiskeys available came the loss in recognition abroad of the pure pot still style itself. The majority of the surviving distilleries began to produce blends and single malts to the detriment of the Pure Pot Still.
tasting note sourced from www.tastings.com