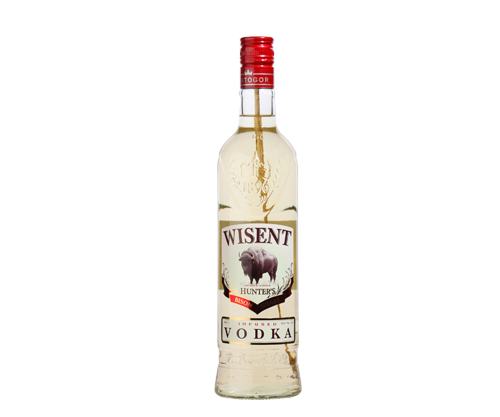 The only place in the world where the bison grass grows in the wild, in small clumps scattered all over the glades and meadows, is the Biaolowieka Forest, acknowledged to be the last primeval forest left in Europe and where there are thousands of European bison living free. The wild-growing grass must be harvested in good weather and at the proper time – early in the summer, when the grass has reached the proper height and colour but is still young and not yellowed. At that moment it is most aromatic. The grass is harvested by hand. Then it is allowed to dry naturally in the breeze and sunshine and is bound in bunches, cut to the required length and delivered to the distilleries. In the distillery the grass is spread on screens and vodka is made to flow through the grass several times to make an aromatic essence. During the next stage this bison grass extract is mixed with pure vodka until the right colour, aroma and taste are obtained, following the traditional recipe. The ready vodka is left for several days to stabilise and harmonise. Experienced technicians and tasters monitor every step of the process. Finally the vodka is filtered and the final product is bottled, with a blade of bison grass in every bottle for decoration.

Two species of creatures have a special liking for bison grass: bison and… hunters. The first look for it in the meadows of the Bialowieska Forest, where it is very abundant. The second look for it rather in the liquid form introduced long ago by the Baczewski Distillery. They say that it is a royal drink, worthy of a royal beast… For the bison – we are speaking here of the European bison – is indeed a regal creature, weighing a ton, three and a half metres long and two metres high at the shoulder. Its noble mane and long beard give it a majestic appearance. Once it was the object of monarchical protection.