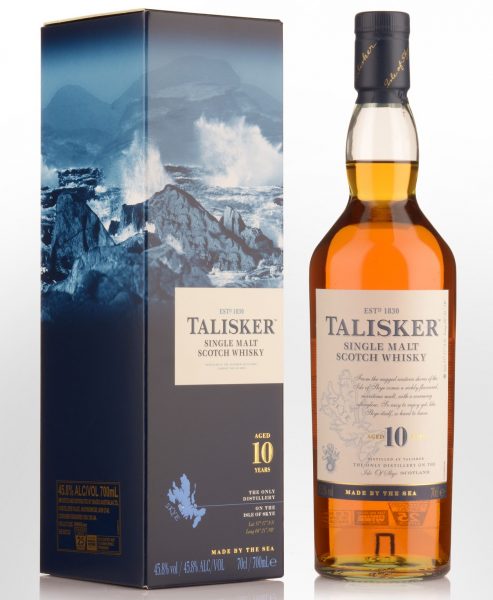 ‘The lava of the Cuillins’ – that is how Talisker, the Golden Spirit of Skye was described by one poetic taster. This is indeed a turbulent Gaelic malt ; the only single malt from a spectacularly beautiful island of wild moorlands and dramatic mountain peaks known as the Cuillins. Built in Carbost in 1831 near ‘Talisker House’, the distillery has entertained such personalities as Boswell & Johnson. Another celebrity who enjoyed his Talisker was author, Robert Louis Stevenson, describing it in 1880 as ‘king ‘o’ drinks’. Stevenson rightly recognised it as bearing similarities to both the Glenlivet and Islay malts. However, by taking ‘the best of both worlds’ so to speak, Talisker had achieved a new, unique style of whisky.

A classic Island dram from the Isle of Skye. Aged for a minimum of 10 years in American oak casks, this welcome member of Diageo’s Classic Malts series has been recognised numerous times for its excellence.

It was an Editor’s Choice at Whisky Magazine, a gold medal winner at the San Francisco World Spirits Competition 2017 and was awarded ‘Best Islands Single Malt’ at the 2017 World Whiskies Awards.

Talisker is one of Scotland’s remotest distilleries which produces a dram with trademark smoothness. Their 10 year old has a powerful peat and sea-salt nose; smoky sweetness with malt flavours and developing warmth with a huge, peppery finish; this Whisky is best enjoyed neat or with a slight dash of water.