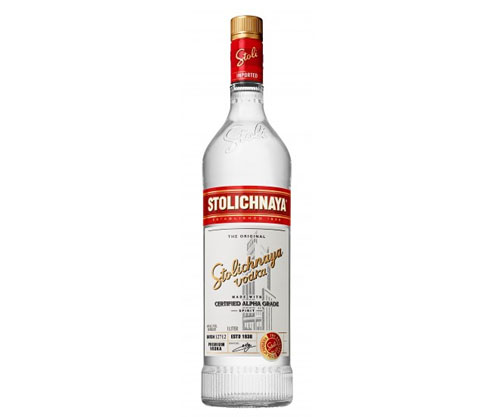 A vodka bearing a Russian name that is actually distilled and bottled in Russia? Apparently so! Stolichnaya (pronounced stol-eetch-n’yah) means ‘capital city.’

The west began drinking “Stoli” in 1972, when Pepsi brokered a multimillion dollar trade deal to import it from the USSR to the US. Since then, Stoli’s become a sentimental favorite; even today, it’s one of the few Russian consumer products to make its way into Western homes. Made according to the traditional Russian methods, using pure grain filtered through birch charcoal and quartz sands, and then blended with pure spring water, “Stoly” is popular for its quality and slightly sweeter, oily taste and texture. The packaging remains a sterling example of Soviet kitsch.