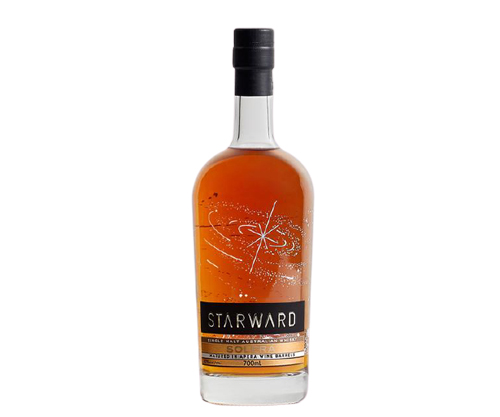 Distillation: We use two very small batch copper pot stills made in Australia: 1 x 1800lt Wash Still; 1 x 500lt Spirit Still.
These stills were acquired second hand from an old Shale Coal mine tourism venture. While not ideally sized for our long term aspirations and scale, they offered a great starting point.
Their design was loosely modeled on those at ‘The Macallan’ but have been altered by the addition of a modified neck- jacketed to provide additional reflux. This is a rare feature and provides the distillers the ability to dial up or down the reflux on the still as desired.

You describe Starward as a “midpoint between Scotch and Bourbon” how does the process lend itself to this statement?
This is definitely our wood policy and the influence of our climate on the maturation process. The depth of oak character and mellowness of Starward comes from the combination of the barrel sizes used to mature the whisky. Rather than focus on one size, 50lt,100lt and 200lt casks are used to provide a diversity of character and complexity. Varying surface area to volume ratios combined with a highly variable climate mellows the whisky faster. While this increases the cost of maturation and complicates inventory management, the results speak for themselves.

Is the whisky matured on site?
Yes the whisky is matured in our distillery. The hangar exterior has been painted black to absorb the sun’s energy during the day. We also have good cross-flow ventilation with roller doors either side of the distillery which allow us to dispel the absorbed heat of an evening if we choose to.