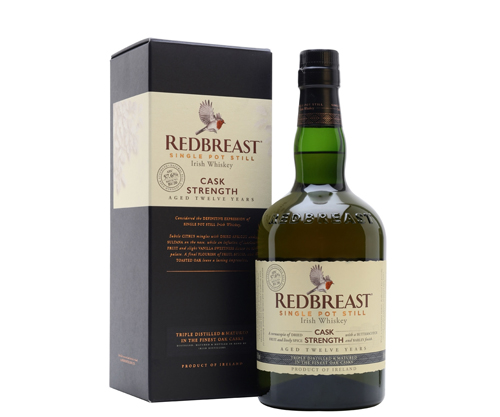 A delightful single pot still Irish whiskey, Redbreast 12 is highly praised by Jim Murray and a host of other notable critics. Named ‘Overall Irish Whiskey of the Year’ at the 2013 Irish Whiskey Awards, we can’t get enough of it.
Single Pot Still Irish Whiskey is unique to Ireland. It is regarded as the quintessential style of Irish whiskey, safeguarded and nurtured under the watchful eye of the Midleton Distillery for almost two hundred years. Made from a mash of malted and unmalted barley and then triple distilled in traditional copper pot stills, Single Pot Irish Whiskeys are characterised by full, complex flavours and a wonderful creamy mouthfeel.
Redbreast 12 Year Old Cask Strength displays the distinctive influence of Pot Still whiskey, which has been matured in sherry casks. This very special cask strength expression, gives a rare glimpse of redbreast 12 in its natural full flavoured state; straight from the cask, unfiltered, no water added.
tasting note sourced from www.tastings.com