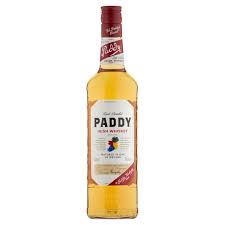 Cork distillery was established in 1779. Wary of preserving the reputation and quality of their whiskies, they were amongst the first to bottle their own to avoid middle men diluting casks and taking a bigger share than Angels would. Their flagship whiskey was popularised by Paddy O’Flaherty, a gregarious Irish salesman whose techniques were so successful that the whiskey became known by his name within the trade. Paddy Old Irish whiskey is considered by noted whisky writer, Jim Murray, as “one of the softest of all Ireland’s whiskies”. Cork distilleries are now in the hands of Pernod Ricard, who thankfully have kept on the traditions of the house with triple distillation, a high proportion of malt and low pot still content followed by a maturation of up to seven years.