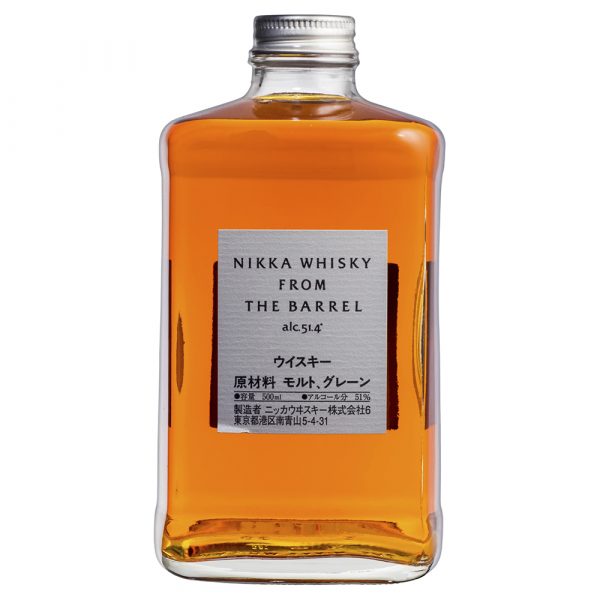 The history and evolution of the Japanese Whisky scene can be traced back to one man, Masataka Taketsuru; a man known as the ‘father of Japanese whisky’. Taketsuru not only left Japan to learn the craft from the experts in Scotland, he also crafted Japan’s first whisky at the Yamazaki distillery before establishing the premium whisky house of Nikka in 1934. This unique bottling of ‘From the Barrel’ is a breathtaking blend of malt and grain whiskies that are hand selected, blended together and then reintroduced to cask upon their marriage. The result is a blend that possesses a distinctive personality characterised by solidity, depth of taste and a richly expanding aroma.

Nikka Straight from the barrel is no exception. Composed of blended single malts from both the Miyagikyo and Yoichi distilleries along with an element of grain whisky that’s all matured in first-fill bourbon casks. Good reviews are not hard to come by, with web based whisky enthusiasts describing this as an excellent value Japanese blend and all round great introduction to the Nikka style. Jim Murray’s also a fan, stating “I have been drinking this for a very long time – and still can’t remember a bottle that’s ever let me down.”
Tasting note: [Batch 24J12B] Deep gold / bright copper appearance. The aroma is pristinely clean and reminiscent of some class sherry bottlings, there’s suggestions of biscuity malt, vanilla and juicy dried fruits. At the same time it frustrates – even after extended time in the glass it’s shy to reveal better definition. In the mouth, soft, gentle spices unfold a blanket of sweet, nutty, chewy malt and dried fruit flavours. A hint of smoke in here too? Clean, slightly tingly mouth feel as the spices increase, but overall this shows good balance at +50%. Finishes as it began – with the spices more settled and drying as the delicate malt lingers through the aftertaste. 51.4% Alc./Vol.
www.tasting.com