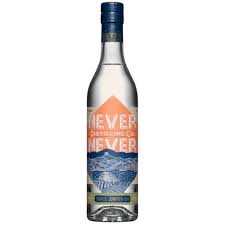 Combining the talents of George Georgiadis, Sean Baxter and Tim Boast, their Triple Juniper gin employs air-freighted berries for maximum freshness. The juniper is treated in three distinct ways, partially steeped, partially in the pot and partially in the vapour. The aim is to capture both the bright and the earthy qualities, and to balance the massive juniper input, a few other botanicals are used: Australian coriander provides brighter citrus and less earthiness than its English or Indian counterparts. A predominate fresh lemon citrus influence with a touch of fresh lime and liquorice adds lift over a root base of angelica and orris. Native pepperberry provides a balancing, savoury element without the heavy menthol finish of traditional peppers. Finally a hint of cinnamon hits just the right amount of warmth.
This Australian craft gin is a throw back to the times when gin had juniper and lashings of it. The juniper is treated in three separate ways, partially steeped for approximately 24 hours, partially put fresh in to the pot at the beginning of distillation and partially in a vapour basket, in carefully selected balance. Despite this obsession with juniper, it is still a force that needs to be managed. A carefully selected bouquet of botanicals honours the brilliance of the juniper by complementing it, rather than overpowering it.
A heaviness of botanical concentration creates a mild cloudiness when the gin is chilled or diluted, something enjoyed as an indication of the flavour and botanical character in the gin.
www.tastings.com