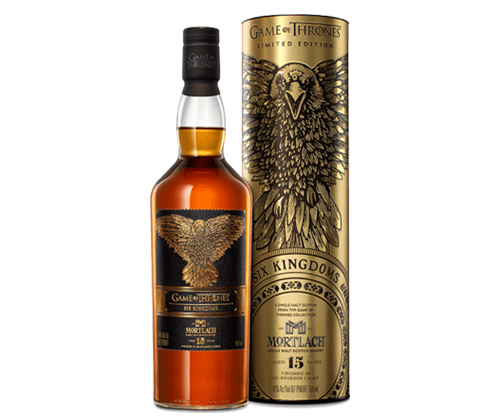 The three eyed raven, a human who once lived among the Children of the Forest beyond the Wall, has the power to see beyond the constraints of time to uncover the past and present stories of Westeros and even reveal flashes of the future. As those stories unfold to impart wisdom and knowledge, they are intertwined and woven into the tapestry of the Six Kingdoms, all while beyond the horizon and above the clouds the three eyed raven watches without a thousand eyes, and one.

Mortlach, Dufftown’s first legal distillery has equally been influenced by the people in its history. George and Alexander Cowie were integral influences for both the distillery and surrounding community, with George holding the esteemed title of Provost and Alexander developing Mortlach’s signature method to distill the spirit exactly 2.81 times a complex process as unique as the three eyed raven. Evocative of the past and crafted for the future, this fifteen year old Single Malt Scotch Whisky has been finished in ex bourbon casks, imparting a bold, smooth taste with notes of vanilla and spice befitting of those with a noble palate.