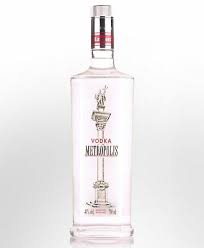 It was not until the 17th century that vodka was established as Poland’s national drink. In this period of time, the Polish also started exporting their production to Northern European countries like Russia. By the 18th century, their techniques had advanced resulting in such practices as triple distillation.

The Metropolis bottle depicts Zygmunt’s column: symbol of the Royal power in the independent Poland. It portrays King Zygmunt III from the Wasa Dynasty (1556-1632) with sword and cross representing him as protector of the country and its religion.
40% Alc./Vol.