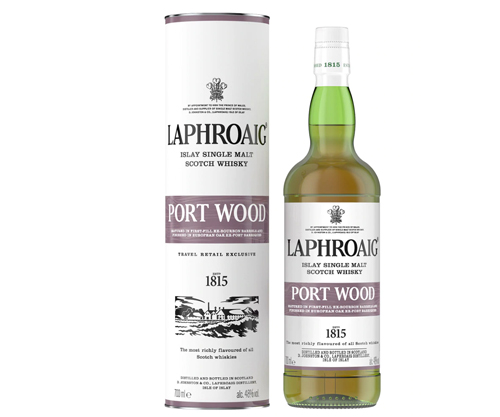 Laphroaig Port Wood combines the signature flavour of Laphroaig with the rich, fruity character of ruby port. This soft and well-rounded single malt Scotch has flavours of red berries, seaweed and smoky peat. Made to a time-honored method, it starts with gently drying malted barley over a peat-fuelled fire. After being mixed with the crystal clear waters of the Kilbride Stream, the barley is distilled and aged in charred ex-Bourbon barrels.

These enhance the smokiness of the peat and impart a hint of vanilla. After maturation, the whisky is transferred to ex-ruby Port barrels where it picks up the subtle fruitiness of Portugal’s famous dessert wine. Originally released as Laphroaig Brodir — meaning brother — this Laphroaig expression is perfect for sharing with loved ones. It’s best served neat, or over ice.