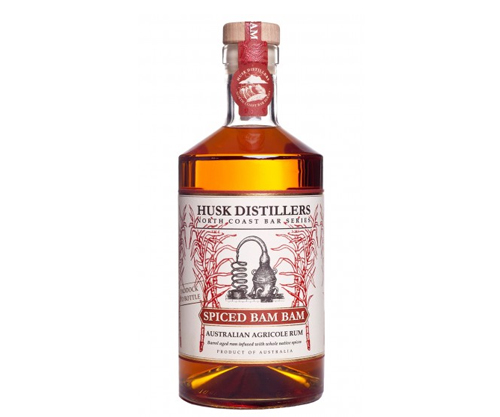 Husk Spiced Bam Bam was created to celebrate the salty coastal rainforests that run along the North Coast of NSW. These vast expanses of remnant Gondwana rainforest are home to some of the most ancient species in the world, and we wanted to explore these botanicals in a rum.

We started with 3-4 year old Husk Australian Agricole rum. We selected two rainforest species to focus on – wattle seed and native ginger, both which grow wild on our farm and across the North Coast.

To complement these flavours we add mandarin, orange peel, cinnamon quills and vanilla beans to add spice & sweetness. The recipe is rounded off with a sprinkle of sea salt.

The whole spices infuse in the rum for 3 months, resulting in a beautifully softly spiced rum that is good enough to sip on the rocks, or mix with ginger beer and a squeeze of lime for a classic Dark & Stormy.