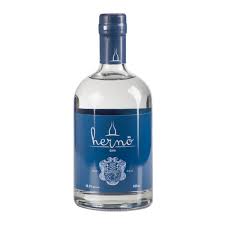 It all started in 1999. Jon Hillgren went to London together with a few friends to start working as bartenders. He discovered gin. During the years that followed the discovery evolved in to an interest in gin crafting. After tasting about one hundred gins, academic studies and subsequent visits to distilleries around the world, Jon finally founded Herno Distillery in 2011.
Situated in the village of Dala just outside the City of Härnösand in Ångermanland, Sweden, it is the country’s first dedicated gin distillery and the world’s northernmost.
Launched in December 2012, Herno Gin was the most awarded gin at The Gin Masters 2013, which was arranged in London in the end of June 2013. It’s an event that has fast become one of the most respected and high profile trade competitions in the industry, attracting many entries from leading brands all over the world. This year 49 gins participated.
Botanicals include juniper berries from Hungary, Coriander seeds from Bulgaria, hand peeled lemon, Lingon berries from Sweden, Meadowsweet from the United Kingdom, Black Pepper from India, Cassia from Indonesia and fresh Vanilla from Madagascar. The gin is hand bottled with each bottle marked with a batch and bottle number.
www.tastings.com