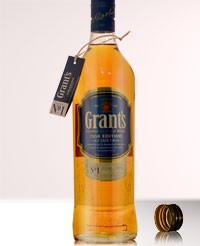 Like most distilleries with history, Grant’s have accrued some colourful stories. Soon after William Grant began distilling in 1887 his sole distributor collapsed, and Grant was left with no outlet for continuing sales. He urgently needed to invent and market his own brand. In desperation, he passed the challenge onto his son-in-law, who, so the story goes, made over five hundred calls to various firms around the country. He managed to sell one dozen bottles! Business gradually improved, and the original Grants we know today was suitably marketed under the “Steadfast” label. The product enhanced its image to cater for numerous international markets, including the adoption of its striking triangular bottle. Its been rumoured that the whisky had favour amongst several heavy drinking Hollywood actors, purely on account of the bottle shape. If they dropped it on stage during rehearsals, it was guaranteed not to roll too far!
A blended whisky from Glenfiddich’s owner William Grant & Sons. The whisky was finished in strong Edinburgh ale casks, very malty. Now it comes with new packaging. Very handsome…
Grant’s have created a world first in Scotch Whisky. Grant’s Ale Cask is the only Scotch whisky to be finished in barrels that have previously held ale. Finishing is the additional time Grant’s whiskies spend in specially selected oak casks after they’ve been matured, which adds further flavour and complexity.
www.tastings.com