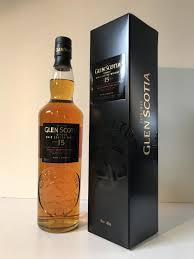 While Glen Scotia has been in the shadow of its famous neighbour, ‘Springbank’ for almost two centuries, a 2014 takeover may soon change that. Loch Lomond Group’s new management has also introduced a new Master Distiller: John Peterson. Boasting over 40 years of industry accomplishments, results are already in the bag with the award winning “Victoriana” (voted best Campbeltown Malt for 2017) and several other highly praised releases. Decades of suppyling material for blends has also placed the distillery in an enviable position: Their huge diversity of barrel stocks is evidenced in the taste, which is quite simply, different from almost anything else in the world of Scotch single malt.This 100% American oak matured release comes in the distillery’s revamped packaging. If you’ve never experienced ‘saltiness’ in a whisky before, you should be able to pick it up in this.