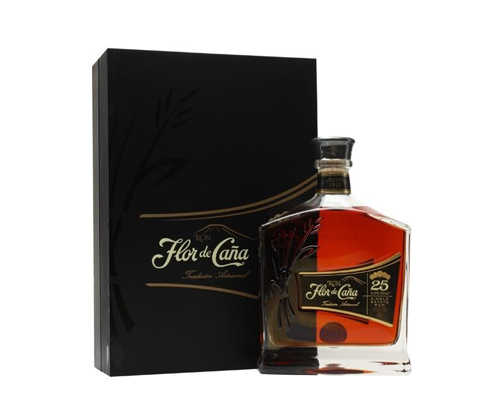 An impressive, well aged Flor de Cana single estate rum, made with spirits which have been aged for at least 25 years. A stunning, radiant hue makes it a wonder to look at, and it tastes as good as it looks. Top shelf rum from the Nicaraguan producer.

Sourced from a single estate with the sugar cane grown on the distillery’s own plantations in the Chichigalpa, then five times distilled, Flor de Cana 25 is the new pinnacle of the range. Only 60 bottles of this ultra-rare rum have been allocated to the Australian market.

Bright polished copper. Seductive scents of light golden syrup, crème caramel and vanilla custard with later inhalations offering dates, fruit’n’nut chocolate, beeswax, pineapple pudding and more. Glides across the tongue with a graceful parade of sugars: crème caramel, vanilla wafer and dates are followed by hints of caramelised pineapple and new leather. Retains a sense of vibrancy and freshness throughout. Deceptively long. Easily the most luxurious of the collection, without sacrificing complexity or elegance. The Audrey Hepburn of Rum? 40% Alc./Vol.