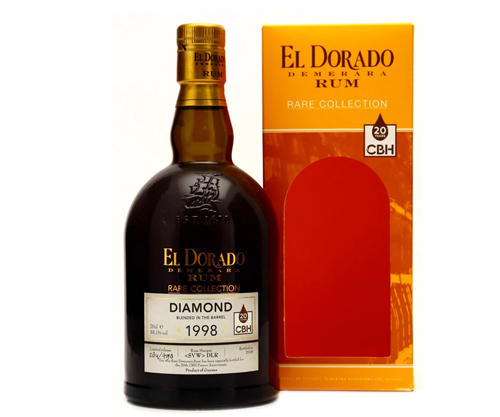 The El Dorado brand was launched by Demerara Distillers in 1992 with the introduction of the now iconic 15 year old. This had been the long-term aim of the company since the Guyana rum industry was nationalised by the government in 1975, which promptly instructed the first rum to be laid down for ageing the following year. The original releases contained rum produced at Enmore, Uitvlugt and Diamond, however as of 2000, all production has been consolidated at the latter. DDL blends El Dorado using various combinations of marques from Diamond’s rum-producing stills, which include the pair of two-column English coffey stills, installed there in the 1950s and a rarely used high-ester John Dore pot still. These operate alongside the “Heritage Stills” acquired from Uitvlugt in 1999, which are Uitvlugt’s own historic four-column French Savalle stills, the Versailles and Port Mourant wooden pot stills, and the Enmore wooden coffey still, the oldest and last of its kind in the world.

Experimental batches of these Blended in the Barrel rums were first showcased by Velier in 2014, in the final year of their celebrated collaboration with DDL which began back in 2005. The success of which indelibly raised the profile of Diamond’s stills and their associated marques, and by 2016 the distillery was encouraged to begin marketing them under its own El Dorado brand.

A blend of rums from the Diamond twin-column and the Uitvlugt Savalle columns, this was bottled in 2018 to celebrate the 20th anniversary of CBH.