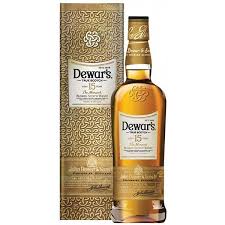 In 1851, Sir Edwin Landseer created an oil-on-canvas depiction of a stag in the Scottish Highlands called, +The Monarch of the Glen.+ An instant masterpiece, the painting was extremely popular through the 19th century. In 1919, John Dewar and Sons purchased the painting and hung it proudly. Almost a hundred years later, master blender Stephanie Macleod used the painting as inspiration for a rare and special whisky. Dewar’s 15 Year Old Blended Scotch Whisky is a blend of very rare vintage single malt and single grain Scotch Whiskies. The blend is then married in oak casks for a light, velvety finish.