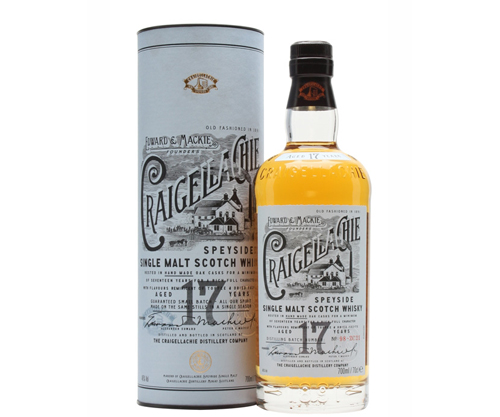 While most of Craigellachie’s production is still channeled into Dewar’s blends, there’s been consistent efforts to showcase the distillery via official bottlings. First came a 13 year old. The 17 year old and a 23 year old shortly followed. Then a duty free exclusive 19 and a world beating 31 year old. Part of Craigellachie’s charm is that it still uses old-fashioned worm tubs, said to add extra flavour while also resulting in whiskies that “taste older than they are”. The house style is typically robust, spicy, warming and slightly oily in texture with citrus and American oak to the fore.
Like previous releases, the 17 Year Old comes handsomely packaged with a ‘retro’ label and an impressive heavy set bottle.