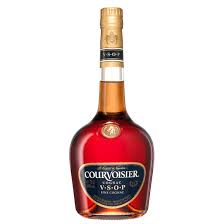 A warm and delicate Cognac, Courviosier VSOP is considered to be one of the finest produced. A complex aroma of spice and oak, it then opens on the palate to reveal its true depth with almonds, vanilla and floral notes.
Courvoisier cognac is famous world-wide for its unique Napoleonic connection, dating from 1811. It was then that Parisian Wine & Spirit Merchant Emmanuel Courvoisier began supplying the court of Emperor Napolean I. Following an aborted attempt to flee to the U.S., Napolean’s stock of Cognac was discovered by British Naval officers on board the escape ship. The British were so impressed with the drink that it henceforth became known as the ‘Emperors Cognac’. Its fame was further reinforced in 1869 when it was named ‘Purveyor by Special Appointment to the Court of Napoleon III’. The House of Courvoisier was built and the silhouette of Napoleon graces every bottle to this day.
Courvoisier is produced from specific grape varieties grown only in the Cognac region of France. Double distilled in the Charente alembic pot still, it is aged in hand-crafted oak barrels. The Courvoisier range includes VS, VSOP, VSOP Exclusif, Napoleon, FCN, XO Imperial, Initiale Extra and L’Esprit de Courvoisier. (The entire range is not currently available in Australia.)
www.tastings.com