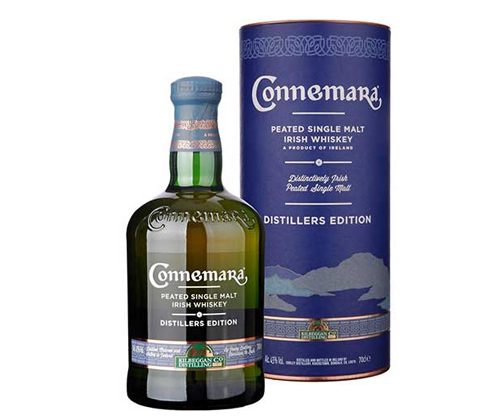 Connemara is a wild, mountainous region on the west coast of Ireland, lying between the Atlantic Ocean and Loughs Corrib and Mask. The peat bogs of Connemara are major fuel sources to the region and have played an important role throughout Irish history as an energy source and in the production of whiskey. However, as many of the distilleries in Ireland were located alongside a canal, the transport and use of coal in distilleries became more efficient than peat. This temporarily killed the tradition of drying malted barley over peat fires in the production of whiskey. Managing Director of Cooley Distillery, David Hynes and chairman John Teeling have resurrected this traditional Irish custom. Noted whisky writer, Michael Jackson commented of Connemara “The revival of rustic peatiness adds a whole new element to today’s palette of Irish whiskey flavours…Lots happening. Chimney pots of smoke. I love this whiskey.” (Whisky Magazine Issue 15) Connemara Peated Single Malt was placed fourth in the Irish Whiskey category at Best of the Best 2003 and received a double gold and Best of Irish at the San Fransisco World Spirits Competition 2004.

Top notch Connemara peated Irish single malt whiskey, presented as their Distillers Edition. Plenty of earthy, evocative smoke, paired with honey’d barley and juicy apple. We do like a good Connemara, we do.
tasting note sourced from www.tastings.com