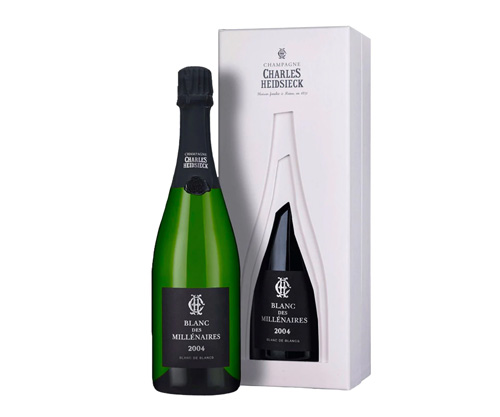 At Charles Heidsieck, Blanc is a universe, a dazzling reflection of the House’s daring achievements. A diamond amongst Charles Heidsieck cuvees, the Blanc des Millénaires takes its incomparable nuances from the pale surroundings of the thousand-year-old Crayères, or chalk cellars. Because of their exceptional qualities, few Blancs de Blancs will reach this level of excellence.

“Blanc des Millénaires”: this exceptional cuvée is named in honor of its ageing conditions. Acquired more than 150 years ago by the founder, the thousand-year old crayères of the House hold a central space in the creation of this cuvée such as time, fourth varietal of the House.

IN1993, Charles Heidsieck presents for the first time Blanc des Millénaires in its prestigious vintage 1983. It was at the time the affirmation of a know-how in the elaboration of Blanc de Blancs (the oldest being from 1949), and the will to affirm a style.