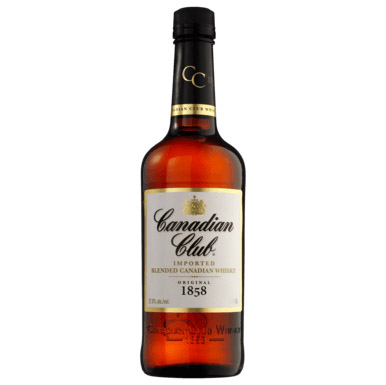 Made since 1858, Canadian Club was first distilled by Hirem Walker and quickly became of the worlds most recognisable brands. Delivering a smooth, light flavor, it is the embodiment of a whisky with the widest appeal, so much so Queen Victoria was known to enjoy Canadian Club, as does fictitious secret agent, James Bond. Blended before aging in white oak barrels for a full six years, Canadian Club, is a benchmark whisky with an extremely smooth, approachable, & versatile taste profile. Best served mixed, with Dry Ginger Ale and fresh squeeze of Lime, Cola or Lemonade.
A collectible bottle of Canadian Club, produced back in 1975. Coincidentally, that was the same year that ‘Rollerball’ was released in cinemas – and it’s set in 2018. We were promised Rollerball!
www.tastings.com