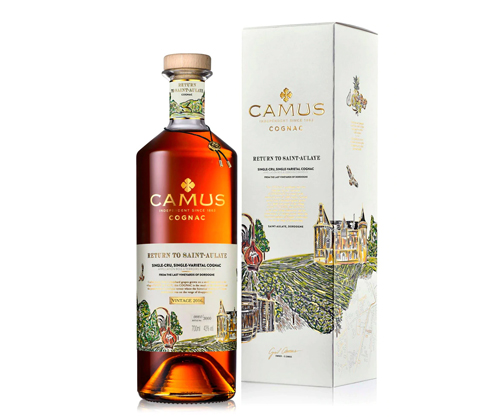 RETURN TO SAINT-AULAYE is the first Cognac produced from the last vineyards of Dordogne, in a small batch, numbered series of 3,000 bottles.

Crafted purely from Colombard grapes grown on a small 1.5-hectare parcel in the village of Saint-Aulaye, RETURN TO SAINT-AULAYE is the outcome of a decades long project to rediscover and protect a unique terroir: although geographically part of the Cognac AOC ever since it was first mapped out, the historical tradition of Cognac-making in this area was on the verge of disappearing from this area.

The synergy between the House of CAMUS and the town council of Saint-Aulaye enabled a meticulous selection of areas to plant new vines and the revival of certain traditional practices, such as using barrels made with wood from the local Double forest. After years of study, development and ageing, the final blend of the 2016 vintage is brought to us now as a limited edition.