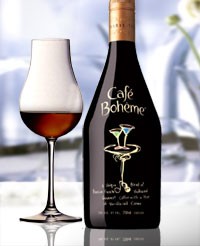 In the 1920’s, American artists such as Gertrude Stein, Alice B. Toklas, Sylvia Beach and Ernest Hemingway fled the puritanical prohibition of the States and found liquor, sex and tolerance in abundance in Paris. They could often be found brooding over an ashtray of Gaulois stubs and coffee that had a little kick in order “to heighten their creativity.” Each salon and café had a unique variation of these chic coffee cocktails that were mixtures of various potent spirits. Recently, one of the recipes was re-discovered and this Parisian ritual has been revived with Café Boheme – a Premium French Vodka and Coffee Liqueur, lighter in taste and texture than other liqueurs of its kind on the market.