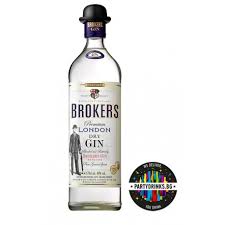 Broker’s Gin was created by Martin and Andy Dawson, two English brothers who saw an opportunity for a new premium brand, and combined seriously good gin with an element of English humour. This light-hearted approach has proved successful and today Brokers is not only distributed all over the world, but has become the gin of choice at No.10 Downing Street and the London Stock Exchange. (The special bottle design with the familiar bowler hat, is worn in honour of London stockbrokers, and led to the companys tag line, “Don’t Forget Your Hat!”)
The distillery is located near Birmingham, England and is over 200 years old with an underground spring beneath the building providing a source of soft, pure water. There had previously been a brewery on the site, but this was converted to a distillery at a time when gin-making became more profitable than beer-making. Broker’s use only traditional pot stills manufactured by John Dore & Co, (recognised as the finest still-maker in the world), rather than column stills. Pot stills better extract maximum flavour from the botanicals. The base for Broker’s Gin is triple-distilled pure grain spirit made from English wheat. Flavour is provided by ten natural botanicals, the primary one of which is juniper berries. Other dried botanicals inlcuding Coriander seed, Orris root Nutmeg, Cassia bark, Cinnamon, Liquorice, Orange peel, Lemon peel and Angelica root are sourced from all over the world and shipped to the distillery in sacks. The botanicals are steeped (soaked ) in the base spirit in the still for 24 hours. This is the first part of the flavour-infusion process. The still is then fired up for the final, fourth distillation, completing the process.
www.tastings.com