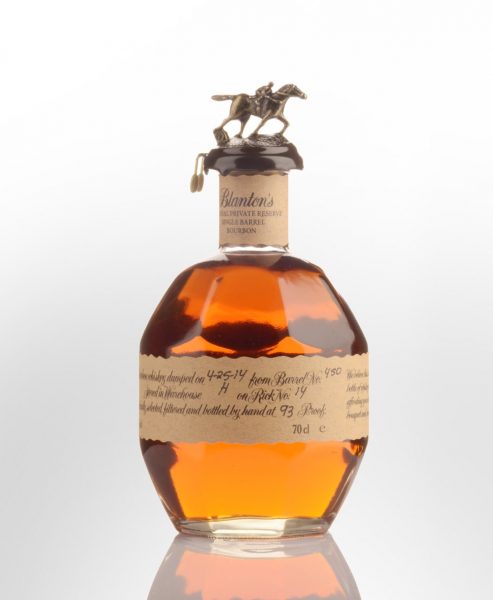 Blanton’s has its place in history as being the first Single Barrel Bourbon, setting the standard for others to follow by creating a new ‘super-premium’ bourbon category. Quite simply, the product is aged in one barrel, and unlike most others, never blended with other bourbon. The principle behind the concept is that each barrel of Bourbon varies, and the whiskey in it acquires a slightly different flavour profile. Furthermore, where barrels are stored in a warehouse, the immediate environment can make a considerable impact on how the whiskey matures. The master distiller periodically samples the whiskey in barrels, especially those barrels in the best part of the warehouse. (Usually this is the very center of the warehouse, called ‘the heart’ of the warehouse. ) Those barrels that are discovered to contain unusually fine whiskey are recorded and tracked with care. There is no margin for error because there is no way to compensate for flavour by mixing the spirit with any other liquid at a later period. At considerable expense to the distillery, the selected barrels are allowed to mature in years far beyond the average age of Bourbon. When they are at their peak of perfection, they are taken from the warehouse — one by one — and bottled one barrel at a time and then packaged by hand. In this way the cream of the crop, so to speak, becomes single barrel Bourbon. The intended result is a new classic every time: unfiltered, uncut – Bourbon of a most individual expression. As a consequence, each bottling can vary in style and flavour.

Taken from the centre-cut or middle sections of the famous Warehouse H, Blanton’s Original was once designated for ambassadors, dignitaries, and Colonel Blanton’s family and friends. Today, everyone has access to the world’s first single barrel bourbon. The taste profile is sweet with citrus and oak. A creamy vanilla nose features hints of nuts, caramel, orange and light chocolate. Blanton’s Original set the standard for single barrel bourbons. Best served neat or on the rocks.
www.tastings.com